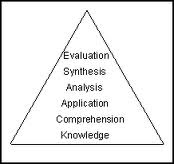 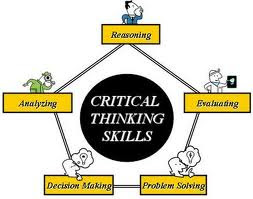 In our series on Self-Responsibility we will talk about the subject of “Critical Thinking.” Here is the definition of Critical Thinking from Wikipedia, the free encyclopedia:

“Critical thinking is purposeful and reflective judgment about what to believe or what to do[1] in response to observations, experience, verbal or written expressions, or arguments. Critical thinking might involve determining the meaning and significance of what is observed or expressed, or, concerning a given inference or argument, determining whether there is adequate justification to accept the conclusion as true.”

“Critical thinking gives due consideration to the evidence, the context of judgment, the relevant criteria for making the judgment well, the applicable methods or techniques for forming the judgment, and the applicable theoretical constructs for understanding the nature of the problem and the question at hand.[2] Critical thinking employs not only logic but broad intellectual criteria such as clarity, credibility, accuracy, precision, relevance, depth, breadth, significance and fairness.” 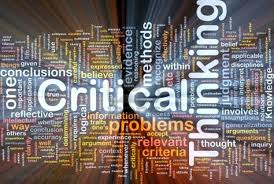 In our daily lives Critical Thinking is very important. Many times people draw their conclusions and state them as facts without any consideration if something said is accurate or not. Making decisions without using knowledge to examine the outcome will not be beneficial to us. There is a term under Critical Thinking called “Common Belief.” This is when we believe a statement to be true because the evidence shows that many people believe it and that belief is widely accepted. Statements that are believed by the masses of people are not proof or evidence of the truth. Neither is something accurate because of past belief or support. Just because it is said, “this is the way it has always been”, does not mean something should be accepted as valid and proper.  There is a difference between belief and truth.  Belief is subjective reality.  It is how our mentality is shaped through past conditioning.  Truth is objective reality.  How things really are.

Many times appeal is made to the masses to so called “common sense”, and judgement of the people as validating a point. The Latin term for this is called Argumentum ad judicium. This is where manipulation of minds takes affect. If one is not careful they will get caught up in the emotion and make incorrect judgements in their lives based off the “common sense” appeal.

There are so many areas that will be used to manipulate your thinking. One of the ways is called Specious Reasoning. This is where statements are made that sound true, genuine and appealing but in fact are worthless as an argument of soundness. Example: People go through personal problems in their lives and they find 10 more people that are going through the same problem and then say that everyone experiences the same thing. If you are not careful you will find yourself agreeing with them and repeating the same statements as truth for everyone.

This is because the word critical has been used with an adverse association. People equate the word critical with the word negative instead of an well-organized manner of thought. When you have well-ordered thoughts, it will result in understanding, examination, assessment, and explanation of the evidence that is presented. This is what Critical Thinking is; clarity, credibility, accuracy, precision.
There is a term known as Argumentum ad populum. This is defined as, “An argument where appeal is made to emotions:  loyalties, patriotism, prejudices, etc.”
If a person wants to gain the confidence of the populous they will appeal to that groups own biases concerning religion, politics, and ethnic background. Making those individuals believe their beliefs are the beliefs that are valid.
There is also Argumentum ad verecundiam, defined as “An argument using respect for great men, customs, institutions, and authority in an attempt to strengthen one's argument and provide an illusion of proof.”
A critical thinker is an enlightened thinker that evaluates the coherence and the cogency of a specific subject.
Here is an example:
There is term known as, Ambiguity Fallacies, which is a statement that is made and the meaning is unclear and it may be a deliberate misused implication.
A business will use a commercial to advertise a product such as pain relief. In the commercial it will state, “3 out of 4 doctors recommend this product.” The implication is that 75% (¾ = 75%) of doctors recommend that specific pain medication. The critical thinker looks at that statement and knows it is a misused implication. The “CENSUS OF ACTIVELY LICENSED PHYSICIANS IN THE UNITED STATES IN 2012", noted that the total population of licensed physicians is 878,194. 75% of that number would be 658,645 doctors that recommend the product and 219,549 that did not. See how it is a misused inference.
Some may say, “It's just a commercial, nobody pays attention.” That is correct. Many do not pay attention and that is why millions of people have been bilked out of their life savings because of Ponzi and Pyramid schemes because they did not pay attention. They did not analyze and scrutinize by giving critical thinking before they invest their money. Yes, critical thinkers raise meaningful queries and compose them in an unclouded and well-defined manner. The critical thinker examines and understands the subject matter that is presented to them.
When people shop at a grocery store, they do comparative price checking, checks the expiration date, see if what they are purchasing fits into their budget. When they go to checkout they make sure that they are charged the price shown on the product. Then, they look at the receipt and if any discrepancies they get it resolved.
When people go to the doctor and the doctor recommends something for you, you don't just take their word for it, you ask questions, you inquire, you give observation to what the doctor has given you as a recommendation for better health. When you pick up your medicine, you ask the pharmacist questions, you read the label and instructions and see if there is anything that might cause an adverse reaction to your health.
When people get their taxes done, they don't sign, or at least they should not, the paperwork without understanding what you are signing. They ask questions.
Some may believe critical thinking is over thinking and it is not important in daily living. It is important. So many people are deceived, because they are not looking into things they are being told. Critical thinking takes precise preparation and discipline of the mind to achieve.
So whether it is shopping, medical, finances, politics, or religion, it is up to each individual to learn to think for themselves and give a unbiased analysis of what is being presented to them. Even when you are given good information it is OK to ask questions. That is wisdom. Be empowered in critical thinking.